Women who Named the Unnamed
Tribute to the Brilliance 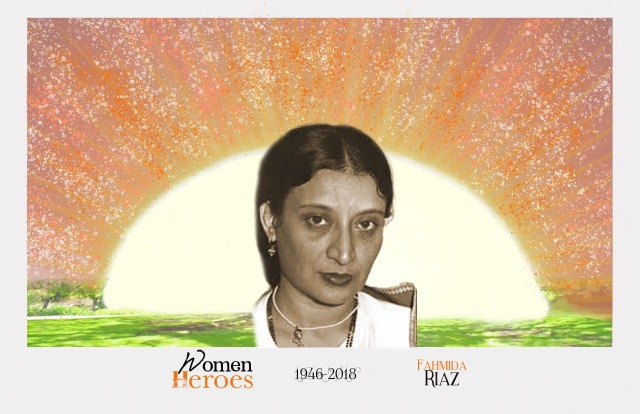 On November 21, 2018, dedicated political activist, unflinching social critic and revolutionary feminist poet Fahmida Riaz passed away in Lahore, Pakistan. She will forever be enshrined in the progressive history of the Indian sub-continent for her lifelong pursuit of a poetics of Marxist-feminist dissent, for her matchless contribution to Urdu poetry, prose and regional intellectual culture.

Fahmida was born in Meerut in 1945. She grew up in Hyderabad, Sindh, where her father had been posted. Fahmida began writing poetry at a tender age, and honed her craft through her experiences of student activism in the 1960s. She was part of a powerful student movement resisting Ayub Khan’s ban on student unions, and published her first book of poetry in 1967, titled ‘Patthar ki Zuban : The Tongue of Stone’. Six years would pass before Fahmida Riaz published her explosive poems in ‘Badan Darida : The Torn Body’. The book courted enormous controversy when it was published. Conventional literary critics decried its exploration of female sexuality and bodily experience as “pornographic.” Regardless of where they stood along the ideological spectrum, men — including progressives and Marxists — could only muster a thinly veiled contempt for her bold insertion of a feminist subjectivity at the center of progressive writing. A self-identified Marxist herself, Fahmida’s work put pressure on radical discourse in the subcontinent, compelling her peers to refine the crude resolutions to ‘the woman question’ many male intellectuals were inclined to present.

Returning from England after her first marriage ended in divorce, she met a Sindhi Marxist, her second husband with whom she started running a magazine called Avaaz. Eventually, the magazine’s brave critique of military authoritarianism under General Ziaul Haq’s Martial Law would force Riaz into exile across the border in India. While in exile, Fahmida penned her celebrated poem, ‘Tum bilkul hum jesay niklay : So it turned out you are just like us’ that makes a powerful comment on the rise of religious fascism on both sides of the India-Pakistan border. Similarly, her poem ‘Aman ki asha : A Wish for Peace’ boldly calls out the vested interests of the military in perpetuating hostility.

While still in India at the Jamia Millia University in New Delhi, Fahmida also wrote a book titled ‘Pakistan: literature and society’, that was published in 1986. Although lesser known than Faiz Ahmed Faiz’s reflections on national culture, Fahmida’s essays on Sindhi, Balochi, Punjabi and Pashto literatures of resistance envision a national character premised on linguistic plurality. As Amina Yaquin points out, unlike Faiz who remained trapped within a ‘myth of nationalism,’ Riaz offered us a dynamic collective identity, in which Urdu too, must bend to the mould of its newfound homeland. At the core of Fahmida’s argument is a critique of what she terms ‘linguistic chauvinism’ and a corrective to the entrenched position of ‘a Pakistani literature that exists in the perception of the people of North India, written only in Urdu, which again, in their imagination, was the language of the Indian Muslims.’

Counter to the state’s inscription of Pakistani identity through a conflation of Islam and Urdu, Fahmida’s analysis takes us to the regional margins and plies through vernacular literature to unearth local modes of resistance. Her own use of language in her poetry also deliberately subverted the cultural agenda of the Pakistani state, while also avoiding the elitist trap of reifying its place in a nostalgic, Mughal past. For Riaz, ‘Urdu was the language of Kabir and Tulsi, the language of the peasants of UP, CP and Bihar.’

Fahmida’s intellectual trajectory was informed by the critical, anti-colonial legacy of the Progressive Writers Movement. Founded in the late 1920s, it bloomed into a loosely-knit cultural movement that addressed the intertwined histories of class, caste, gender, colonialism and citizenship in South Asia with a commitment to radical transformation. Her politics, and her poems, subvert the border by embedding themselves in a collective historical memory that is rapidly being forgotten 70 years after Partition.

In the latter half of her literary career, Fahmida focused her energies on prose. Her engagement with literary pasts and cultural history led her to pen a historical account of the life of Mazdak, whom she described as a pre-Islamic revolutionary in Iran espousing principles of egalitarianism and social equality. This book, titled ‘Qila e Faramoshi : The Castle of Forgetfulness’, was published in 2017 and is her last work of prose. The drive behind Qila e Faramoshi emanated from her translations of Rumi, and found resonance with her forays into regional literature. She also translated the works of Sindhi poets, Shah Abdul Lateef Bhitai and Sheikh Ayaz, indicating her interest in a cultural project that unearthed marginalised subjectivities in Islamic and regional pasts.

This sensitivity to the productive potential of the peripheries stemmed from her own subjectivity — as a political activist, a progressive poet and most importantly, a woman. The exploration of a gendered body, through a poetic idiom that pushed the conventions of literary Urdu remains her most impressive feat. In 1989, following the lifting of General Zia’s martial law, Fahmida would return to Pakistan from exile. She continued her work, her writing, and her activism. Between 2009 and 2012, she served as the chief editor of the Urdu Dictionary Board, one of the many public-sector jobs she would undertake pertaining to languages and the arts. She remained a staunch voice for oppressed groups within Pakistan, especially the Baloch. She wrote her last book of poetry, ‘Tum Kabir : You Kabir’, dedicated to her son who died an untimely death, leaving her all too soon.

Today, as we are left bereft of her skillful working of the sharp insights of materialist feminism into the subtle plays of Urdu verse, let us remember her most for her unfailing commitment to the principles of justice, dignity and equality for oppressed classes everywhere. Let us remember her in her own words from her poem, ‘Condolence Resolutions’:

This corpse belongs to a being
Who said whatever she wanted
Was never repentant, lifelong.
Do not let the authorities own my corpse.

Adapted by the Author from her article,’Don’t make my corpse apologise: lessons in dissidence from Fahmida Riaz’, published in Pakistan’s daily Dawn on December 4, 2018.

Sara Kazmi is pursuing a PhD in Criticism and Culture at the University of Cambridge. Her research focuses on progressive Punjabi poetry in India and Pakistan. She has been extensively involved with performing street theatre and protest music in Lahore, Pakistan, and in particular, is drawn to questions of gender, regional identity, and radical language politics.